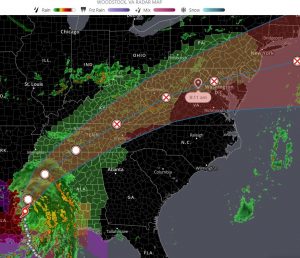 WOODSTOCK, VA – The National Weather Service in Baltimore/Washington, issued a Flash Flood watch for Shenandoah County from Wednesday morning, September 1, 2021, at 2 A.M., through early Thursday morning. Tropical Storm Ida is expected to bring rain to parts of Virginia, Maryland, and West Virginia. This event could result in heavy localized rainfall amounts of 2-4 inches in some areas with up to 6 inches possible.

Flash flooding is flooding that begins within 6 hours but often within 3 hours of heavy rain. Flash floods are the most dangerous kind of floods because they occur so quickly, and their potential impact is largely unknown.

A Flash Flood Watch means flash flooding is possible and everyone in the watch area should be prepared.

A Flash Flood Warning means flash flooding is imminent or already occurring and everyone in the warning area should take  action and seek higher ground immediately.

Residents and visitors should be prepared before flooding occurs and can learn more at ReadyVA.gov/floods

“Stay tuned to your local weather forecasts and know what to do if flooding does occur,” said Fire and Rescue Chief Tim Williams. “Avoid walking through flooded areas and NEVER drive through flooded roadways. Flash Floods are the number 1 weather related killer in the United States.”

Campers staying in sites along creeks, streams and rivers in low-lying parts in the Watch area are strongly encouraged to know what to do if an evacuation is needed.

Here are the foundational steps to preparedness and keeping you and your family safe: Woodstock, VA- The Shenandoah County Department of Fire and Rescue announces a fatality as a result of drowning.

On Thursday, February 25 at approximately 9:00 a.m. Shenandoah County Fire and Rescue crews were dispatched following reports of a car being swept into the North Fork of the Shenandoah River, while attempting to cross the Artz Road bridge, located north of Woodstock. A female in her late 70s was attempting to cross the low-water bridge, while traveling west when the car went off the bridge.

The vehicle was located approximately half a mile downstream, submerged. There are no known passengers who were with the driver.

A deceased victim was located late this afternoon several miles downstream from the location of the submerged vehicle.

“Our fire and rescue companies regularly train for water related emergencies,” said Chief Gary Yew, Shenandoah County Fire and Rescue. “Tragically, in this case we lost a member of our community.”

The victim’s identity is being withheld pending positive identification by Office of the Medical Examiner and notification of family.

Swift water rescue companies from Orkney Springs, Strasburg, and Frederick County in addition to fire and rescue companies from Woodstock, Toms Brook, and Shenandoah County responded to the scene. Resources from the Shenandoah County Sheriff’s Office, Virginia State Police, Virginia Department of Transportation, and AirCare cooperated in the search and rescue operations.

Shenandoah County Department of Fire and Rescue reminds every one of the importance of avoiding driving across roads that are submerged in standing or flowing water.